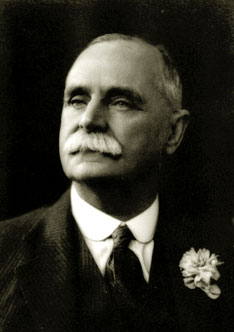 Sir William Angliss was one of Australia's most prominent early businessmen. He pioneered frozen meat exporting in Australia and by the 1930's had established probably the largest personally controlled meat enterprise in the British Empire.

Sir William made a significant contribution to Australian government and society. In the words of Sir Robert Menzies:

‘He left an indelible mark upon one of our most significant export industries...

His personal ambitions were few and simple. He was, in fact, one of those who did much for us and sought no headlines in the doing.

It has been my great fortune to know some of the founders of our nation.

Not one of them retains a more lively place in my memory and my affection than Sir William Angliss.’

Sir William was knighted in 1939 and served as a member of the Legislative Council of Victoria from 1912 to 1952. He not only chaired many private companies, but was also actively involved in charity work, supporting the Salvation Army, movements to settle migrant children in Australia and endowments to various hospitals.

Through his Will he continued his philanthropy by establishing two Charitable Funds, one in Victoria and the other in Queensland to be held in perpetuity upon trust.

The income of the Funds were to be applied to charitable purposes.

Who was William Angliss?

William Charles Angliss was born on 29 January 1865 in Dudley, Worcestershire, England, the second of 11 children. At 14 years old, after his schooling at the Moor School in Hawkhurst, Kent was completed, he was sent to London to live with an aunt and uncle. It was here, with his uncle, that William first worked in the butchering trade. In his late teens he made the decision to emigrate.

From his initial training as a butcher, William Angliss eventually developed a global business empire and became the dominant figure in Australia's highly competitive meat export trade. Along with his diverse business interests, he was actively involved in community service as a representative of the Victorian Legislative Council (1919–52) and was a member of numerous boards. He was knighted in 1939 in recognition of his contribution to Australian business and philanthropy. At the time of his death he had amassed considerable wealth, a quarter of which was set aside for the establishment of two charitable funds. William Angliss died in Hawthorn, Melbourne, on 15 June 1957 at 92 years of age. He was buried at Box Hill Cemetery after a state funeral at St Paul's Anglican Cathedral.

Emigrating to Australia and arriving in Melbourne

Prior to arriving in Australia, William Angliss worked in London and New York. The prospect of working in Australia was more appealing, however, because he determined that there were opportunities to be had in such a recently settled colony of the British Empire. He disembarked at Rockhampton in November 1884, but moved almost immediately to Brisbane in search of work. After a year working in Queensland and then Sydney, he went to Melbourne, arriving in November 1886. By the end of that month, William Angliss had resolved to establish his own business and secured premises for that purpose at 719 Nicholson Street, North Carlton. The business opened on 29 November 1886.

William Angliss diligently learnt all aspects of the butchering trade. He worked very long hours, sometimes forgoing sleep, in order to complete his work. In the early days he worked in every facet of the business from buying carcasses to bookkeeping. From here it was a natural progression to take an interest in livestock sales, and then to acquire slaughter yards.

Innate good business sense and capacity for hard work were evident in William Angliss's considered and prudent business investments, many in real estate, which sustained him financially through the 1892–93 Depression. Following the expansion of his premises in North Carlton, William Angliss found increasing financial success through meat export, firstly to the goldfields of Western Australia and then overseas to the imperial forces fighting in South Africa and then to Britain.

In 1898, in Bourke Street, Melbourne, he built a large refrigerated plant, a smallgoods manufactory and a shop with an office and residence included. Being located in close proximity to Melbourne's busy Eastern Market assured him plenty of business.

The meat-freezing and export trade provided more capital which allowed William Angliss's business interests to expand further. He financed the construction of a large abattoir and freezing works in Footscray which opened in 1906 under the name Imperial Preserving and Freezing Works. Next, he turned to the lease and purchase of large pastoral properties in New South Wales, South Australia and Queensland. Some of these properties were bought or leased in partnership with Australia's ‘cattle king’ Sir Sidney Kidman. He eventually sold the meat export business in 1934, but continued to pursue other business opportunities.

Family was always an important factor in William's life. Many of his family members came to play a role in the numerous Angliss businesses.

He encouraged the rest of his family to move to Australia where they could enjoy the kinds of opportunities that he had found. He purchased a large home in Harcourt Street, Hawthorn where family members lived until they married. He named the house ‘Benbow’ after John Benbow, a famous British admiral and family ancestor.

William Angliss was involved in many diverse businesses such as the Premier Printing Company Pty Ltd, the Clifton Brick & Tile Pty Ltd, and the Northern Timber Company. These kept him interested in life and engaged with those about him. One of his longest standing board associations was as chair of the Eagle Star Insurance Company, a position he held for 50 years. Recognising his knowledge of the meat export trade, the Australian government invited William Angliss to be one of Australia's delegates to the Ottawa Conference. This month long event, held in Canada in 1932, gathered together representatives from British colonies to discuss trade policies as a result of the Great Depression1.

He was also interested in housing and developed three subdivisional housing schemes for his workers between the two world wars. At one, the Wembly Park Estate in Yarraville, several streets were named after family members and significant family places, including Eirene Street, Bena Street (Jacobena's shortened name) Benbow Street and Hawkhurst Street.

Even though his business interests were wide ranging and complex, he enjoyed simple personal pleasures such as reading, games (including bowls and deck quoits), his garden and dogs. Sir William had his own deck quoits court at Benbow and regularly played with (and could beat) Sir Donald Bradman. And of course, he greatly treasured his family.

Philanthropy during his lifetime

William Angliss's philanthropic endeavours began well before the establishment of the charitable funds that followed his death. Many institutions and individuals benefited from his generosity but as much giving was done privately, it is impossible to report accurately on how much money he gave away. He donated generously to hospitals, schools, Boy Scouts, Girl Guides, religious institutions, the Salvation Army, the Lord Mayor's Fund and the Big Brother Movement. He also donated land for two recreational reserves and gave a significant parcel of land to the Lady Northcote Trust.

The William Angliss Food Trades School (now the William Angliss Institute) opened in 1940. It was the first such institution of its kind in the southern hemisphere2. Sir William met the entire cost of the college's construction, over £20,000, in order to provide better training for technical apprentices in the food trades. He also served as president of its school council. Today, the William Angliss Institute is recognised as a provider of specialist education for the tourism, culinary arts and hospitality sectors and has expanded its operations nationally and internationally to cater for over 22,000 students.3

In March 1939, William Angliss donated £1000 towards the construction of a much-needed bush nursing hospital, which was officially opened by him in December 19394. It was initially known as the William Angliss Bush Nursing Hospital. Servicing an increasing local population, the hospital soon needed to expand, and Sir William, as he was known by this stage, donated £10,000 for a new facility to be constructed. The hospital was also remembered in his will with the provision of a further £100,000 donation. Angliss Hospital continues to provide a range of healthcare services to residents of Melbourne's outer eastern suburbs.

In 1934, at the request of his brother-in-law, William Angliss provided the deposit, and then the required mortgage, for the school to purchase its present site in Mont Albert Road, Canterbury. He later provided further financial assistance to redevelop the site. This generosity ensured the school's future. In December that year, William Angliss laid the foundation stone for the site's first new building. The Angliss Building, as it became known, officially opened in March 19355. Although it was extended by the addition of a new wing in the mid 1960s, the original 1935 Angliss Building remained as a ‘milestone of considerable significance’ in the history of the Mont Albert campus.6

Sir William Angliss was a hard-working man whose fortune was built through diligence, attention to detail and remarkable business acumen. As a principled Christian and Freemason and one who believed in giving back, his will made provision for the establishment of two charitable funds, one to serve Victoria and the other Queensland in recognition of his considerable pastoral holdings there. Distributions today continue to benefit causes and community organisations he had supported throughout much of his life. Sir William Angliss made a meaningful and lasting contribution to society and his legacy of giving lives on.